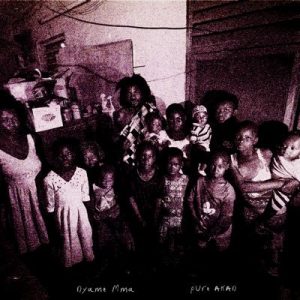 Pure Akan Set To Release Nyame Mma Album On 12th August. After taking to social media to announce that his sophomore album was going to be a gospel album, Pure Akan is here with the title of the project alongside a release date and a cover art ending the hiatus after his 2017 debut Onipa Akoma. Nyame Mma, which has been in the works for close to 3 years comes with a dark and grainy cover that presents Akan engulfed by 2 women and 11 children.

Known for the dense cultural references in his music, the rapper appears wrapped in kente and a staff, connoting his ever-growing interest in Ghanaian culture. He stands in as the Linquist and mouthpiece of the forefathers and to inform the younger generation of their African values and history. Even though the news comes with no information about the tracklist or features, a tweet by producer Twistedwavex, revealed the rapper in the studio with Ayisi, which many have suspected could be a sign of the singer appearing on the album.

The album is scheduled for August 12th and we are happy to know the message Akan has in store for us. Pre-order the album here; https://li.sten.to/5ylTM5p