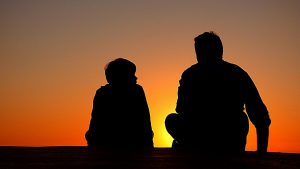 “I took a knife and attempted to end my life because I was going through hell. I was so much hurt I never thought a man I took as my father and named my daughter after can enter into a sexual relationship with my wife and impregnate her,” embittered Emmanuel told Starr News.

Emmanuel accused the Chief Executive Officer of Otado Investment Limited- a private company in Koforidua the Eastern regional capital of collapsing his marriage after philandering with his wife who was working with the company.

According to Emmanuel who was a fuel pump attendant, he became friends with the CEO – Nathaniel Oti Anim in 2009 as a loyal client and took him as his father. He said later around 2014, the CEO offered him a job opportunity in his company but pleaded with the CEO to employ his girlfriend – Hannah who had lost her job then. The CEO employed her on February 1, 2014.

Fast-forward, the CEO got married in 2015 for the second time after his first divorce while Emmanuel also married his longtime girlfriend on 13th February 2016. He later started his own business after he quit the fuel station work.

The wife subsequently delivered and named the baby girl after the CEO of the company. Later, the love relationship between the couple turned sour after the husband gleaned from the mobile phone of the wife pieces of evidence which corroborated with a tip-off that the CEO was allegedly having extramarital affairs with the wife.

The marital issues deteriorated despite several attempts by family heads of the husband to resolve it. The wife packed out of the house alleging that the husband has threatened to kill her and commit suicide. Church leaders of Christ Apostolic Church (CAC) where the CEO fellowships were informed but failed to investigate the matter.

ALSO CHECK OUT:  Medikal Is Such An Ungrateful Wicked Person - Okese 1

Emmanuel was later arrested and put behind bars at the Eastern Regional Police Headquarters for allegedly abducting their then three-year-old daughter from Koforidua to Tema where he relocated to stay as a way to recover from the pains. He was later released.

According to him, divorce processes were hurriedly initiated by the wife with the alleged backing of the CEO in 2019 which was granted by the court in August 2019 without his notice.

Currently, the CEO and Emmanuel’s ex-wife have a child together and has rented an apartment for her.

Jilted Emmanuel says he has been blocked by the Ex-wife from seeing the daughter since 2019 threatening to fight on to ensure he takes custody of her.

The CEO of Otado Investment limited, Nathaniel Anim, admitted impregnating and having a baby with Hannah -ex-wife of Emmanuel after their divorce.

“I was not the cause of their marital issues. We all tried to help them resolve it but it didn’t work. But for now, I won’t lie to you I have a baby with Hannah. It was after their divorce”.

Hannah who feels threatened has recently relocated to a different community in New Juaben South Municipality.

This narration is happening at the back of concerns over increasing domestic violence incidents emanating from deteriorating marital relationships in the country. Man attempts suicide after CEO impregnated his wife.