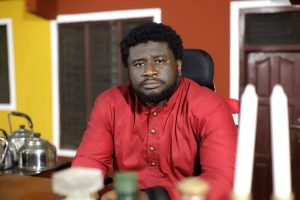 Footballers are playing with the head of John the Baptist. Prophet Ajagurajah has made a shocking revelation about the invention of football which he traces to the bible. According to, Bishop Abed Kwabena Boakye Asiamah, the founder of the Ajagurajah Movement, a spiritual organization rooted in the teachings of the old testament, football originated from how John The Baptist was killed in the Bible.

In a video seen by pulse.com.gh on social media, Ajagurajah explained that John The Baptist was beheaded by Herod Antipas with head kicked around in a manner that shows how football is played now.

“When John The Baptist was beheaded, the daughter of Herod went to give it to her mother and she kicked it away and someone too played it with the leg and then they formed football, a lot of people don’t know this,” he said in Twi.

twitter.com
This would be the first time Ajagurajah has come out with a shocking revelation. Last year in September, he made headlines after he said Jesus Christ married Mary Magdalene and had five children with her in France.

A few months ago, he also said a top Ghanaian rapper is married to a demigod and that the rapper’s career is only booming simply because of the woman he is married to.

ALSO CHECK OUT:  Elladeevah was my girlfriend – Boy accused of raping her

Ajagurah however refused to mention the name of the said rapper but emphasized that “you will never hear of his wife” He also disclosed that the day the said rapper will divorce his wife, his career will collapse.

“The day he will leave his wife, he will go back to square one. If he thinks I am lying, he should try. It is the girl’s spirit that has seen reach where is now,” he said.

According to Bishop Kwabena Boakye Asiamah, even on any day, the rapper gets involved in an issue or serious disagreement with the wife at home, something bad happens to him that sees him having trouble on social media for people to insult him.

Hear more from him in the video below: Footballers are playing with the head of John the Baptist – Prophet Ajagurajah.