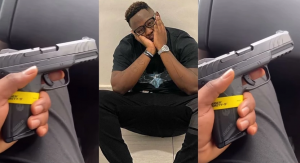 On Friday night, the rapper took to his Instagram story page to share a video flashing his new pistol. He added no caption to the video.

His newly acquired pistol is a popular American brand, and it’s the famous Ruger American Pistol.

The Ruger American Pistol is a polymer-framed, semi-automatic pistol introduced by Ruger in December 2015. The pistol uses a pre-tensioned striker firing system and is chambered in 9mm Luger and .45 ACP, according to Wikipedia. It costs $579 (equivalent to GHC3,400).

He later announced an album tour and praised his fans, saying: “Meditants, Medigang and AMG be the best!”

Medikal was recently in the news for walking off stage at this year’s 4syte TV Music Video Awards. While other acts were performing with Medikal, the rapper left the stage in a manner that appeared to shock viewers. Speaking on Hitz FM, he detailed that he left the stage for Kuami Eugene to continue with his performance.

“I didn’t walk off stage to disrespect anyone…” he emphasized and explained that “it was planned that after we’re done performing that song, we were all going to get off stage for Kuami Eugene to do other performances.”

He added that “it’s a song we recorded for 4Syte TV. After doing my verse, I thought we were all supposed to leave but my colleagues were still on stage because they were not done with their part; I was done… It wasn’t a disrespectful act at all”.

According to Medikal, he went to sit down and that shows he wasn’t angry. “If I was angry, I would have left the venue,” he added. Medikal flaunts newly acquired pistol on social media.

ALSO CHECK OUT:  Davido Finally Reveals Why Burna Boy And Wizkid Are Fighting Him