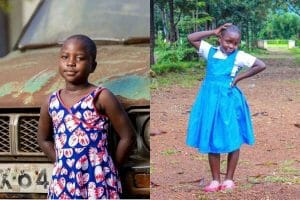 All You Need To Know About 9-Year-Old Bridget Bema. Bridget Bema is already an internet sensation at the age of 9, and the Kenyan child comedian is already making waves across the continent.
A skit centred around the character of Bridget Bema is going viral on social media platforms, as many have likened her to Nigerian comedian, Emanuella.

With the video trending #1 in Ghana, social media users have reacted with some calling Bridget Bema a “true hooligan”.

In the video, pupils had gathered outside their classrooms for morning devotion when their teacher brought out a list containing names of students who committed different offences.

He called the names and their offences one after the other, and Bridget Bema’s name came up several times.

Now the FAQ about Bridget Bema is:
Bridget Bema is a Kenyan content creator and child comedian who is also the younger sister of rising Kenyan comedian, YY.

Born on November 10, 2011, the adorable 9-year-old often appears in comedy videos with her brother.

Talking about her brother, Oliver Otieno AKA YY The Comedian, played the School Administrator in the viral video where Bridget‘s name was reeled for varying misdemeanours ranging from late-coming to noisemaking and bullying.

VIDEO Below: All You Need To Know About 9-Year-Old Bridget Bema.

ALSO CHECK OUT:  Diego Maradona Has Died At The Age Of 60 After Suffering A Cardiac Arrest