You got what you voted for – Bulldog tells #FixTheCountry advocates. Bulldog born Lawrence Nana Asiamah Hanson says that Ghanaians are enjoying exactly what they voted for. While some Ghanaians are lamenting over the hardship in the country and ebbing their fury against the Akufo-Addo administration, Bulldog has a different school of thought.

According to him, Ghanaians should shut up and enjoy the hardship. Known to be a staunch supporter of the National Democratic Congress-NDC, Bulldog believes Ghanaians have no ‘right’ to be complaining over a decision they made with their vote.

In a post on Facebook, Bulldog wrote; “You are getting EXACTLY what you voted for – SHUT UP and enjoy.” 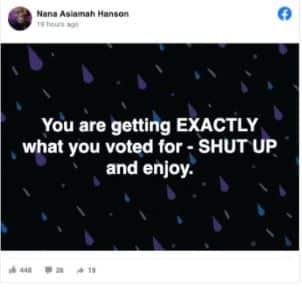 His comment follows the complaints made by some Ghanaians on Twitter over hardship in the country. These users have urged the government to listen to the cry of the citizens and fix things.

The #Fix The Country has dominated on Twitter for the past days. The trend has seen many celebrities joining in a quest to push for this new agenda/call on the government to be up and doing.

The likes of Yvonne Nelson, John Dumelo, Efia Odo, Serwaa Amihere, et al have all expressed their total displeasure at the Akufo-Addo led government over the high cost of living and poor management of the nation. You got what you voted for – Bulldog tells #FixTheCountry advocates.

ALSO CHECK OUT:  UCC SekzTape : Lady Heard Moaning All Over UCC Ogua Hall
Tags
You got what you voted for - Bulldog tells #FixTheCountry advocates
URL Copied