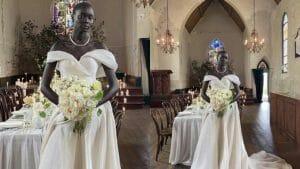 Woman Marries Herself, Claims She Is Tired Of Men. A South Sudanese woman has married herself with the starling explanation that she took the decision because she is sick and tired of men.

The ebony lady based in Australia shared a photo of herself in the church where she got married to herself.

According to Ayuol Manyok, she is completely tired of men who in the name of love have become a pain in her neck. Following that, she has decided to marry herself to save herself from all drama.

Check the post out below : Woman Marries Herself, Claims She Is Tired Of Men.

Sick of these niggas, so I made my own vows to myself 👰🏿‍♀️ pic.twitter.com/xvBufz4Ozd

ALSO CHECK OUT:  Vibes And Shades: Sarkodie Eulogizes Music Lovers With No Pressure Album
Tags
Claims She Is Tired Of Men Woman Marries Herself
URL Copied