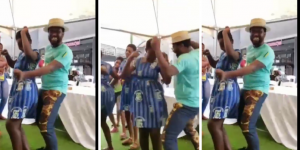 Video : Abeiku Santana Spotted Grinding An SHS Girl. An Over-Excited Abeiku Santana Goes ‘Crazy’ In The Midst Of SHS Girls. In a new video circulating on Social media, popular radio presenter, Abeiku Santana is seen overly excited as the twerking of some SHS girls, so much that he’s seen trying to catch some fun by positioning himself for a lap dance moment.

The video has shocked some Ghanaians as they are surprised a renowned presenter would behave in such a manner in the midst of SHS girls who are all probably underage.

We can’t say that, he was under the influence of alcohol for certain, but looking at the dance moves those girls were exhibiting and the sweetness of the sound of the music being played, Abeiku must have ‘lost’ in and even decided to ignore the “morality rule”.
Can we even blame him? Watch the video below: Video : Abeiku Santana Spotted Grinding An SHS Girl.

ALSO CHECK OUT:  Patapaa and wife reportedly expecting their first child together