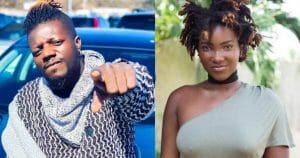 The gods Of Sunyani Killed Ebony Because S he Was A Lesbian. Rapper Pope Skinny has come out to reveal that Ebony’s died because she did what is considered an abomination in the sights of the gods in her hometown.

In a new video, the rapper who is currently in the US alleged that the late Ebony was indeed a lesbian as speculated by some in the past.

Pope Skinny claimed that God revealed to him that Ebony and her partner Franky Kuri made love in her hometown in Sunyani and this triggered the gods of the land to strike them down.

He said that although the late songstress was in the bad books of a number of industry players, the real cause of her death was because she slept with Franky during her visit to her mum’s house in Sunyani.

WATCH VIDEO BELOW: The gods Of Sunyani Killed Ebony Because S he Was A Lesbian.

ALSO CHECK OUT:  Real story of the Wesley Girls’ student who cried to be saved from her abusive husband