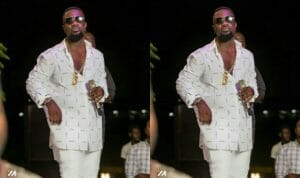 Shut Up And Send Me To Court If I Owe You – Sarkodie Slams Ayisha Modi. Rapper Sarkodie has replied his critics who have labelled him as ‘stingy’ over claims that he refuses to pay people he works with their due. According to him, anybody who feels hard done by him could send him to court.

This claim was intensified by Aisha Modi when she appeared on Peace FM some few weeks ago and said Sarkodie is very stingy and has refused to give Castro’s mum even a cedi after working with him.

On the same show, Aisha Modi intimated that it was Castro who made the most-viewed ‘Adonai’ song hit and it is just prudent for Sarkodie to pay the family what is due especially after the singer went missing in 2014.

Replying Aisha Modi and other individuals who believe he (Sarkodie) is very stingy and does not like to pay people and reward others who contribute to his rise, the rapper said anybody who fails cheated by him can settle the case in court.

Dropping a line on the recently released “COLD” music video by Joey B which featured him, Sarkodie said he has heard what Aisha Modi said on Peace FM accusing him that he is stingy but will not engage in any back and forth with her.

“I have heard it all but I am very relaxed. I heard you were on Peace FM, sorry I didn’t listen because I was monitoring my cash in stocks. If indeed I owe you, let’s settle it in police barracks and court and not on the radio…if you don’t receive a reply from me after denigrating me it just means you don’t deserve my attention.”

Watch Music Video Here : Shut Up And Send Me To Court If I Owe You – Sarkodie Slams Ayisha Modi.