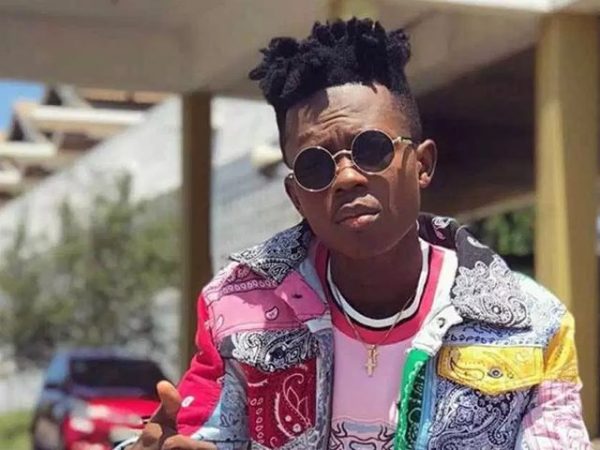 Nightmare Review : Strongman Drags Sarkodie, Medikal And Others In New Song. Following the release of his 10AM album after almost a year of anticipation, Strongman has followed the Strong project with something even stronger and much controversial. He didn’t even rest after the release of his 10Am album as he followed it with a new single dubbed “Nightmare” which is strongly directed to the entire Ghanaian music scenes but mostly centered on the likes of Sarkodie, Medikal, Lyrical Joe, Kweku Smoke, Teephlow, Yaa Pono and a few other rappers.

The song came unexpected with no anticipation. It just dropped out of nowhere and caused a massive stir and uncertainties over who exactly it’s directed to. The song comes lyrically camouflaged with sneak disses and indirect shades which hold both pretty and ugly sides making it hard to tell whether he’s really shading his targets or commending them. This is mostly concentrated on the Sarkodie sides.

Strongman may have measured the risks involved in putting dirt on the name of his mentor so he cleverly camouflaged the shades in the appreciations such that deep logical thinkers are the only ones to decipher the messages within the messages.

Other rappers like Medikal, Teephlow, lyrical Joe, Kweku Smoke were directly humiliated by the kumerican wordsmith. Medikal looks like the most targeted in the song whiles Kweku Smoke and Lyrical Joe were painfully brushed aside with some hard and painful shades. Let’s find out how by taking a direct review of the song.

Like I said earlier, Strongman brilliantly camouflaged the shades but we will consider the two sides of each line directed at Sarkodie so we can all have a say for ourselves on whether it’s meant to be in favor or against.

“2 years back I was feeling like a pet, now the lion is out of the cage”

This is referenced to Strongman’s time under Sarkcess music owned by Sarkodie himself. There seemed to be strict rules governing the contract Strongman had with sarkcess music such that he didn’t have the chance to react to feuds even when they were centered around him.

An instance was when Teephlow went on a stampede throwing shots at Strongman here and there but he couldn’t react due to the disciplinary accords of the label. Strongman feels these accords made him sound soft in the eyes of everyone which prompted anyone to jump on his neck because he could never rebut.

Now that he’s out of sarkcess music he feels he’s gained his freedom and more relaxed to do what he does best which is lyrically slaying anyone who tries to step on his toes. On this note Sarkodie likely made him as soft as a pet killing the warrior in him but now he’s boldly free out of the cage as a lion.

Looking at things differently, there’s a positive side of this line as Strongman somehow seems to be conveying a message to Sarkodie to appreciate how his label held him down against indulging in unnecessary feuds. At the moment strongman seems to only be moved when the shades are coming from people on his standards. This goes far to his beef with Medikal.

From word on the streets this line is nowhere directed to Sarkodie or even related to him. From a brief detail from someone within the strong empire, Ace Hood is a guy who sells clothing and sneakers to strongman. He even get a boutique here in Kumasi at kejetia and he was in the music video. He was thanking him on the things he has been doing for him. That Ace Hood guy got really good Streetwear stuffs.

It sounds less offensive and non related but that’s the goal behind the song. To make the agenda invincible to non critical thinkers. From the head to toe of this line is a shade to Sarkodie and more importantly a serious one. Strongman used this opportunity to remind Sarkodie about his controversies surrounding the New Guy collaboration and how Sarkodie lied about the whole series.

This line right here confirms Strongman doesn’t see Sarkodie as his senior anymore. He sees himself above him now or perhaps feels he’s in a competition with him.

Here is how it reflects. “Meye Fly kyen Eagle” Means “I’m more fly than an eagle” which simply means he’s way higher than an eagle. The Akan name for an eagle is Okodie. Sarkodie was pronounced the Okodie of Ghana rap way back by Obrafuor. Ladies and gentlemen, safe journey to 2021.

It all seemed cool between Medikal and Strongman after they squashed their beef and collaborated on song together titled “Bossu”. Looks like That reconciliation already expired as they are back at each other’s throats once again.

It’s simple to know who started it again. Medikal jokingly passed a comment claiming strongman looked like his dog. Looks like that was nothing. On a recent song by Medikal titled “Street Code”, Medikal went ahead to state Cleary that whoever had a feud with him in recent times ended up underground with a dead career. A direct shade to Kwesi Arthur and Strongman. Guess what? Strongman served him nicely.

“Tell me one nigga wey go fit me”

Strongman made it clear no one can stand him no matter what so Medikal is dreaming big time to think he ever stood a chance against him.

A direct reference from Medikal’s Omo Ada song where he claimed all the rappers are asleep because they can’t stand his greatness. Strongman made it clear to him if he was even sleepy he would still drink nescafe signaling that no one was ever asleep and he had no greatness to boast of in the first place.

To whoever doesn’t want to soak Gari but ready to drink. Strongman went on personal about Medikal’s fraud lifestyle reminding him he’s a nothing but a celebrated thief.

Strongman reminded Medikal that he’s never had to do Useless songs to stay relevant. This is nothing but facts. Medikal over the years has dropped some Senseless Songs to stay relevant but there goes strongman still strong without even joining the train of nonfa songs. Speaking volumes of how he’s way above Medikal’s caliber of an artiste.

The feud between strongman and Teephlow dates way back. Undoubtedly one of the longest running rap feuds in the history of ghana music. Strongman reserved some lines to dedicate to his long standing rival.

” I worked my ass out now adey cash out, wadwene me ho saa ama epe afa wo. don’t throw stones you living in a glass house. Me punch baako tumi ma blackout. ”

If we are been honest Strongman always go harder when it’s about Teephlow. Perhaps maybe that’s because they go way back.

Strongman reminded Teephlow he’s worked hard to get where he is and he’s reaping the fruits of his labour as he’s now cashing out big. Looks like Teephlow isn’t cashing out too. Teephlow was always moaning about Sarkodie signing Strongman over him.

On this grounds, Strongman also reminds him of how he’s currently irrelevant due to centering his energy on competing with him even though There was no competition between them as he already defeated him in a battle.

Strongman went ahead to warn him not to try coming at h again since he’s currently weak. Strongman reminded him of how strong he’s become such that his punches can cause a blackout. That’s the genesis to revelation of the don’t throw stones you living in a glass house. Me punch baako tumi ma blackout line.

Can we say we don’t know where these two came into the Strongman vrs others conversation but they keep throwing shades at him for no reason. Well Strongman sent them a fair message.

That’s a fair and direct understandable line. Thank us for alerting you who’s shade is this. We want some lyrical violence and expect some retaliation from these two. My bets on Strongman by the way.

The biggest highlight of the decade was Kwesi Arthur dropping diss songs around. He somehow involved Strongman in his beef with DopeNation and Medikal. Well now Strongman got some leisure time to send him a warning.

This line is so cold that Kwesi Arthur might need more blankets to survive it. He warned him straightforward never to involve him in his Beefs with others because he won’t tolerate. What makes it so special is the Messi reference.

The two got songs together so he made it a polite reminder.

Well that’s where it gets ugly. The painful part as well. Strongman dissed us all. He couldn’t even spare us even though we came in peace to enjoy his song.

He reminded us our favorite rapper is in his pockets. How rude of him to forget most of us idolize the likes of Tupac Eminem, Manifest, Nas, J Cole, Kendrick Lamar and Co. We won’t forgive him tho.

In Conclusion, Strongman is begging us to stop sleeping on him because he’s way above greatness. If the GOAT tag is the highest rank he needs a new rank way above the GOAT rank. Thanks for reading.

Check the song out below : Strongman – Nightmare

TagsMedikal And Others In New Song Sarkodie