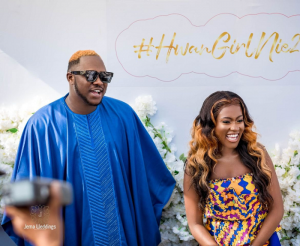 Medikal Publicly Reveals His Reason For Marrying Fella Makafui. Fella Makafui and Medikal are unquestionably one of the best young couples in the country, with one of the most amazing marriages. Most people assumed it was because of Fella’s large bum that is why Medikal left his ex Sister Debbie and go in for Fella.

But Medikal in a recent video has revealed that this is not the case at all, citing Fella’s genuineness and love, as well as the fact that she is a hardworking lady. He said this during their performance at the just ended Ghana Music Awards UK.

Watch the video below; Medikal Publicly Reveals His Reason For Marrying Fella Makafui.