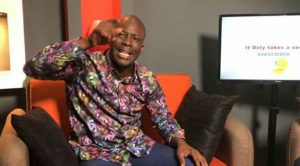 ‘I would have poisoned myself if were to be in Odartey Lamptey’s Shoes’ – Kumchacha. Kumchacha said he would have killed himself if he ever experienced such an ordeal. Popular Ghanaian pastor, Nicholas Kumchacha, has applauded Ghanaian footballer Odartey Lamptey for displaying an act of resilience and bravery throughout his ordeal with his ex-wife.

It can be recalled that the estranged wife of the footballer, Gloria Adjoa Appiah-Lamptey, filed a third appeal after the court threw out her second appeal in a bid to continue to stay in a seven-bedroom East Legon mansion built by the footballer despite the fact that she was nabbed for committing adultery.

Among other things, DNA results revealed the footballer never fathered any of their three children after 20-years of marriage in a chilling expose’ which marked a dramatic end to the relationship.

But reacting to all of these, Kumchacha said he wouldn’t have had the strength to go through what the footballer experienced with his ex-wife.

Kumchacha said he would have committed suicide if it were him.

“It will only take God to intervene for me else I would poison myself. If I have a gun, I can shoot myself and die. I believe he has a good counsellor because it’s not easy. If it should happen that the only child you have with a woman is not yours it will not be easy to deal with, let alone three. This shows that some women are evil,” he said in an interview with Oman Channel.

Speaking on the initial reliefs granted to Gloria by the court, Prophet Kumchacha said the former wife of the ex-footballer should have counted herself lucky for receiving settlement.

“I applaud the judge because she was empathic to her,” he said.