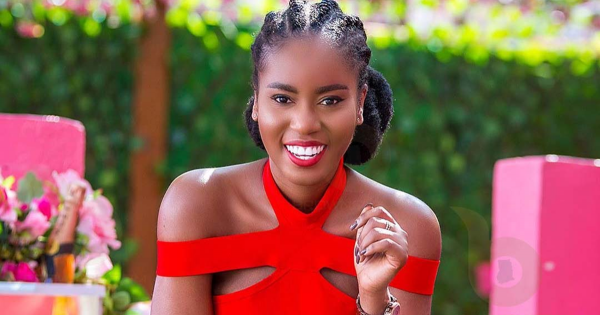 Before we begin let us all keep in mind that our various top female musicians in Ghana were also born and accorded a naming ceremony where they were given fitting names to by throughout their lifetime. They were never born musicians but they became musicians at one point in their life and managed to climb their way to the top thanks to the good songs they churned out and the amazing stage names they crafted for themselves which managed to stay in our heads rent-free.

Known as one of the best vocalists in Africa, Efya is undoubtedly up there with the best of the best when it comes to African music and no one is ever taking that title away from her. She has been doing her thing for as long as we can remember and still out there doing what she does best which is putting out captivating music to snatch the soul away from the troubled waves of reality to the musical dimension. Just in case you want to know, Efya’s real name is Jane Awindor

She made one of the badest entries into the music scenes with her “Bokor Bokor” song which featured Zeal of VVIP and followed up that success with more greatness whiles sweeping out awards and making a great deal for herself both in Ghana and outside. Despite her popularity and success, it will surprise you that a large percentage of her fans don’t even know that her real name is Vera Hamenoo-Kpeda.

Dubbed as the replacement for the late Ebony Reigns, there were a lot of expectations from Wendy Shay because Ebony was out of the world but luckily for her, she lived up to that expectations with hit after hit and securing her name on the top where she always belonged. There’s been a lot of controversies around her but she always stood tall. Here is a secret, Her real name is Wendy Asiamah Addo but please don’t tell anyone you heard it from me else I will be in trouble.

Yeah, that’s her. The best female rapper on the entire African continent and I am not the one acclaiming her please but rather MTV said so. She is the type of rapper your favorite rapper always tries to avoid because it will end in body bags. I wanted to compile a list of rappers who have been running away from her but it’s okay since we are only here to find out about her real name. The real name of Eno Barony is Ruth Eno Adjoa Amankwah Nyame Adom.

If you haven’t heard some beautiful lady whispering ‘My mind dey for you then please stop reading my article. Gyakie who happens to be the daughter of the legendary Ghanaian musician Nana Acheampong came out of nowhere just to capture our hearts with her extraordinary vocals and gave us one of the most memorable songs titled forever. Currently, she has graduated from the Kwame Nkrumah University of Science and technology so we expect more of whatever she did to us, And by the way, her real name is Jackline Acheampong.

We can’t really leave her out because over the years she’s been giving us exactly what we expect from her which is good music. She came out of nowhere with her ‘Kro Kro No’ song and to this day she is still out here giving us more of that undiluted vibes. As far as we can tell, controversy is her cup of tea so we barely get triggered when she makes a scene. And by the way, her real name is Francisca Gawugah.

TagsHere Are The Real names Of Your Top Ghanaian Female Musicians