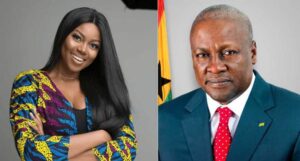 “Don’t Be Dumb! Mahama Fixed Dumsor” – Yvonne Nelson Schools Fan. Ghanaian actress, movie producer and political aspirant, Yvonne Nelson has schooled a fan who blamed her for organizing a vigil for the power crises Ghana faced sometime back. Yvonne made it clear that former President, John Dramani Mahama, the former president of Ghana, and pointed to the fact that Dumsor had been resolved before he was kicked out of office.
Few weeks back, there was an argument on social media about who solved the incessant outages of power that crippled the economy of the country.

The New Patriotic Party(NPP) claims that they have fixed dumsor, which was a money problem for them but former President John Dramani Mahama insisted that before he was elected out of office, he fixed the Dumsor problem.

As far as Yvonne Nelson was concerned, former John Dramani Mahama repaired the intermittent power outages before he left office.

Making this known in a tweet, she wrote ‘I understand you’re stupid…. My dumsor campaign was for Ghanaians to get their lights back on, which President Mahama fixed and nothing else, let someone smart clarify to you.

I understand you are dumb…. let someone clever explain to you my dumsor campaign was for Ghanaians to get their lights back on, which President Mahama fixed and nothing else. pic.twitter.com/EtBuoAUQcv

ALSO CHECK OUT:  Keri Hilson Is 7 Months Pregnant A Year After Working With Stonebwoy