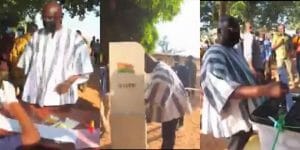 Vice President Dr. Bawumiah Casts His Vote At Walewale. Today 7th December happens to be the Election Day for the country as citizens who are of sound mind and above 18 years are expected to cast their vote.

Since 1992 this has been the process of electing our President and parliamentary candidates which has been peaceful every time to date and expected to continue like that.

Qualified voters across the country have queued up to vote whereas others have already voted successfully despite one or two hitches being reported on social media.

His Excellency, the Vice President has also successfully cast his vote at Walewale where he hails from which went quite smooth.

The 2nd gentleman of the land was seen in a video posted by UTV, going through the due process to cast his vote for his preferred presidential and parliamentary candidate.