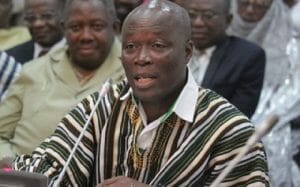 Member of Parliament for the Odododiodoo constituency, Edwin Nii Lante Vanderpuye has been reportedly arrested alongside 14 others who are on his team.

NDC MP Nii Lante Vanderpuye Arrested Over Involvement In Odododiodoo Shooting. The National Democratic Congress Parliamentary Candidate who had earlier on accused the police of attacking him and his family was picked by the police at his hotel lodge out.

This news was reported by Accra based GH One TV.

The police accused him of being involved in a shooting incident in which two people have been injured.

His lawyer, Leslie Anim, described the allegations against the Odododiodoo MP as intimidation.

“They said there was a gunshot here and he has been arrested for it. He can’t be intimidated on election day,” the lawyer said. NDC MP Nii Lante Vanderpuye Arrested Over Involvement In Odododiodoo Shooting.