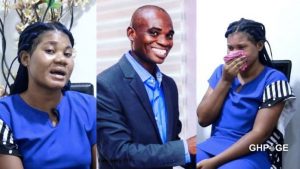 According to her, she had gone out to enjoy with her friends at a joint and that was where she met Dr UN who was by then-popular after giving out a fake award. He expressed his intention of starting a relationship with her and taking it further by getting married to her which she also agreed and they both started going out.

Matilda told Rashad of GhPage TV that they started meeting in hotels and restaurants to eat and have fun whenever he comes to Kumasi because he had told her he stayed in Accra and only comes to Kumasi when he has a business to take care off.

Fast forward, three months ago she noticed she had missed her period, took a pregnancy test and the result came in as positive. She called Dr UN to inform him of the situation but he told her he was busy and was working on his new song so he needed his peace of mind and later started avoiding her and her calls.

The 17-year-old went on to say Dr UN called her later and told her to come and see her so they can go and see his doctor for an abortion to be carried out but she turned that option down. A video recording shared with Ghpage sees Dr UN in a meeting with Matilda and her sister who was trying to solve the matter amicably.

When he was told about the pregnancy he denied the pregnancy saying Matilda is telling lies. Matilda in the interview stated that the only thing she needs from Dr UN is to accept responsibility for the pregnancy because she doesn’t want to give birth for her child to be tagged a bastard.

ALSO CHECK OUT:  Students Are Now Disrespectful Towards Parents Because Of Free SHS - Franklin Cudjoe