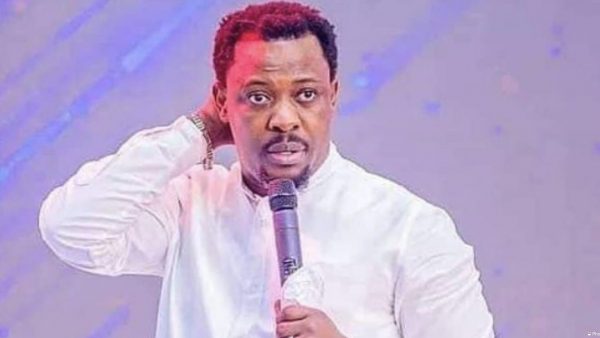 Video : Prophet Nigel Gaisie Curses Church Member For Voting For NPP. The feed we’re picking from footage available to us has it that Prophet Nigel Gaisie of Prophetic Hill Chapel fame has cursed one of his female church members for allegedly voting for the NPP Party and its flagbearer Akufo Addo.

The church member who has been identified as Bridget in an interview revealed that Nigel Gaisie allegedly sent curses to her on phone and this conversation was first revealed by her mother.

Narrating how the whole thing happened, the young lady explained that she belongs to one group that always tease people and since NDC lost the elections, the group members decided to troll members who belong to the NDC.

Now due to how funny it was, she also reposted those messages on her WhatsApp status which was seen by two of the church members who had her number.

She later received a message from one of Nigel Gaisie’s junior pastor who asked her why she was making fun of the NDC knowing very the church leader Nigel had prophecied for them and he has been seeing it on her status.

Bridget continued that she knew very well that the junior pastor was telling lies so she requested that the pastor sends her screenshot of the said things she posted on her status which he did.

She went on to say that looking at how serious the messages were, she showed them to her mother who also went to the church premises of Nigel Gaisie to question why they would curse her daughter.

ALSO CHECK OUT:  Akuapem Poloo Reacts After Court Ordered Her To Pay Ghc100k Over Nude Photos

The mother in the interview disclosed that she was almost beaten by some men from Prophet Nigel Gaisie’s church asking why she came there in the first place after what her daughter has done.

Below is the video : Video : Prophet Nigel Gaisie Curses Church Member For Voting For NPP.

I Don’t Mind Being A Second Wife – Actress Reveals

Video : I’m The Only Human Powerful Than God – Spiritualist Brags
I Don’t Mind Being A Second Wife – Actress Reveals