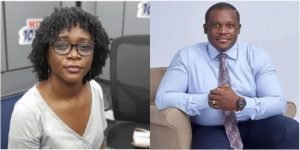 According to Leila Djansi, the anti-LGBTQ+ bill crusade by Ningo Prampram MP is no different from those who assume that aged persons in Ghana are witches and therefore should be confined to a certain camp against their wishes.

She urged Ghanaians not to sing the praise of Sam George but rather condemn him for embarking on a cause that has could spell danger for some persons. Leila Djansi raised concerns with aspects of the anti-LGBTQ+ bill which she holds are draconian and should not be encouraged.

Taking to Facebook, below is what Filmmaker Leila Djansi had to say;

“#Ghanaians!! Reason! @samgeorgegh is NOT a hero! He’s a dangerous man. It’s people like him that instituted the Gambaga witches camp where a mere accusation, proven or not, lands a woman in exile. You’re hailing him today, he’ll come after your other freedoms tomorrow for his ego and political ambition.

“Gambaga witches camp criminalized old age. @samgeorgegh is criminalizing sex and sexual orientation. I am a filmmaker and I have family in Ghana. So if I direct a show or film that depicts LGBTQ and I am in Ghana while it airs, and I promote it, I might end up in prison?? Gotta get my entire family outta there if that dangerous bill passes!

‘So, anyone could frame another for being gay. Your hand could accidentally brush someone’s breast or penis and you could be stoned to death. Yes. Stoned. Ghanaians burnt a military guy alive on mere accusation and stoned a woman to death also on an accusation of witchcraft.

“Sam George is a dangerous man. A true Dzata. A lion who mauls without recourse. His hunger is all that matters,” parts of her post read.

As a reminder, Leila Djansi’s reaction comes on the back public praise for Sam George after he put up a defense of the bill on CNN. Stop celebrating Sam George for criminalizing s3xual orientation – Leila Djansi.