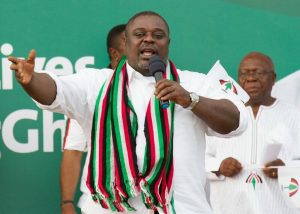 Koku Anyidoho jams to Ampofo Agyei’s ‘if you do good’ song. At the near-end of a long-debated interview, Mr. Koku Anyidoho decided to treat himself to some local high-life music in the studios of StarFM on March 10, 2021.

Mr. Ayidoho who was at a point infuriated and almost walked out during an interview with Nana Aba Anamoah after he was questioned about his wife, was later captured jamming to Ampofo Agyei’s ‘if you do good, you do for yourself’.

Obviously engrossed in the song, the Founder of the Atta Mills Institute did not only sing word-by-word the lyrics of the song but also backed it with some dance steps.

Explaining why he has a special interest in that particular song, he said:

“This song is one of my all-time favorites. Truly, if you do good, you do for yourself. There is so much pressure in doing good things,” he said.

Watch the video below from 1hour 18 minutes onwards. Koku Anyidoho jams to Ampofo Agyei’s ‘if you do good’ song.