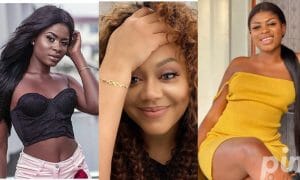 You Look Like The Infinix Version Of Nadia Buari – Social Media Roast Yaa Jackson Over Bleaching. Before Yaa Jackson became the superstar she is now, she used to have a rather dark skin tone but after the fame finally got to her, she has been looking a bit toned in her latest photos which has raised concerns among some concerned fans.

Funny enough, some people online have even suggested that Yaa Jackson is the Infinix version of ‘Nadia Buari.

Comparing some of her old photos and her new photos, it will be safe to say that the “Tear Rubber” hitmaker has changed complexion from her old chocolate complexion to a white ‘obroni’.

See some of her photos below;