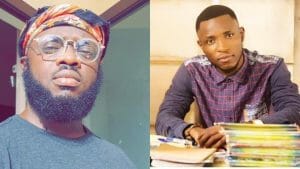 Screenshots : Teacher Kwadwo Vows To Open Top Classified Secrets About Sheldon. “I am going to make you weep for the evil you’ve planned against me” Teacher Kwadwo vows to expose Kwadwo Sheldon.

Teacher Kwadwo, in a twist of events, has said he is going to expose all the shady and secret deals of Kwadwo Sheldon and in the end, make him weep.

Why is he saying this? Well, Kwadwo Sheldon has called him a rapist and paedophile and has brought out some skeletons from the cupboard with a screenshot of a post Teacher Kwadwo made on Facebook that was sexually suggestive.

Per this post, in 2016, Teacher Kwadwo shared a post where he called on his followers to help him with the techniques as to how he plans to rape a female student in his school.

This joke landed Teacher Kwadwo in hot waters where he was penalized and suspended by the Ghana Education Service (GES) and his ambassadorial role with the Huawei Mobile at the time was cancelled.

So for Kwadwo Sheldon to bring back this joke which clearly did more harm to the image of Teacher Kwadwo then, the teacher turned comedian says he feels Kwadwo Sheldon wants to drag his name in the mud.

Therefore, he has also sworn to expose Kwadwo Sheldon. According to him, Kwadwo Sheldon should brace himself up for a huge exposé on all that he has been doing secretly.

@kwadwosheldon trust me,no amount of lies can save because the kinda evidence I have here,u are doomed!!!
I came with a clean mind for TROLL,I never knew u had planned evil against https://t.co/3UCjRhmPhq me,I will make u weep bitterly with the evidence I have. Game on!!! 🤝🏽😊

ALSO CHECK OUT:  You were an underground artiste for 19 years - Yaa Pono reminds Shatta Wale

Screenshots : “You Are A Pedophile And Rapist Tho” Sheldon Drags Teacher Kwadwo