Home Joey B is responsible for who i am – Papy kojo

Joey B is responsible for who i am – Papy kojo 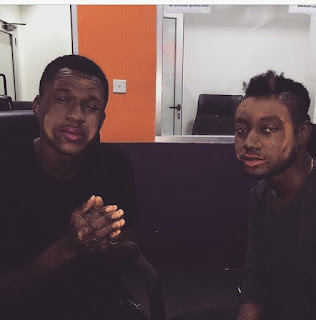 They were the very best of friends, attended almost every event together and we are tempted to believe they even went on girl hunt together (don’t mind us) but just as nature may have it, the two went separate ways due to misunderstandings.That, however does not prevent Pappy Kojo from celebrating Joey B on his 28th birthday.On the said date, Pappy Kojo took time to send a birthday shout to the friend with whom he recently released a single M’akoma attributing his success to him.In a post, he said, “There wouldn’t be no Pappy kojo without Joey b.hes responsible, forevergrateful , happy birthday BEEZY!”Pappy Kojo wears a tattoo of his dear friend Joey B on one of his arms as a sign of respect and appreciation for what he has done for him.In September 2016, Pappy Kojo revealed the two ‘fought’ over an issue leading to their separation, “That’s my brother. Brothers fight. Do you have a brother? You fight with your brother right? Exactly”.

Afia Schwarzenegger took care of her husband for...

PHOTOS: Here is the man Afia Schwarzenegger was...

PHOTOS: All to know about “cheating” husband of...

I ride on friendship with ‘big men’ to...

Call Or Whatsapp us

Need Help? Chat with us
Start a Conversation
Hi! Click one of our member below to chat on Whatsapp
The team typically replies in a few minutes.
Kobby Michael
Content Manager, Inquiries , Author
Richard Nkansah
Support Member, General Inquiries , Author