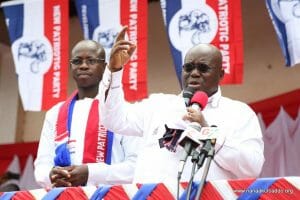 “The Ashanti Region is the heart of the New Patriotic Party. As a political party, if you don’t focus more on your base you would always be found wanting.

“Our party from time immemorial; the Ashanti region has remained our cornerstone so there is the need for the people of Asante to support and encourage the party in everything”. President Akufo Addo said this in an interview with Kumasi-based Angel FM.

When asked why he has frequently visited the Ashanti Region in the few days to the elections Nana Akufo Addo responded saying, “That is tactical and arithmetic. At all cost we have to get 3 million votes at home”.

To consolidate the vision and mission of the party, NPP has already launched what it termed as operation 47 / 47 which aims at winning all Parliamentary seats in the region including other three belonging the main opposition NDC. Election2020 : Akufo Addo Sends Strong Message To Ashanti Region.

ALSO CHECK OUT:  Sex Before Marriage Is To The Glory Of God - Counselor Lutterodt